Every so often, I get really get annoyed with a box that any new perfume and the bottle design. It's always a joy when I buy a full bottle of perfume, even if it is a backup bottle. But the packaging that holds the perfume itself is irritating. What has gotten me annoyed with this stuff is I got my back up bottle of Nasomatto Nuda.

I am not talking about when the package itself arrives at my doorstep. Getting my perfume, unbroken, is important. Everything (the USP box and peanuts) except my invoice and perfume gets thrown out. I've always liked how Chanel and Serge Lutens (export line) look and loved the packaging because it is minimal. The bottles are plain, the packaging is plain. All in the idea of that the perfume should not be judged by the packaging but in the perfume itself. Sometimes, less is more.

The whole Nasomatto line has gotten me a little riled. The glass that actually holds the perfume is just fine but the cap is just horrid. I mean, really? A round, wooden cap. The cap is huge and just doesn't fit. The skanky tuberose/jasmine perfume is great but the cap could have been thought out a little better. Too much bulk and it just looks bad because of the proportions.
Posted by Eldarwen22 at 11:38 PM No comments:

I'm sitting in front of my computer screen without a clear idea of what or why I am blogging for today. After a short road trip, I have forgotten all of my potential ideas and posts but then remembered the Deneuve EDT sitting on my dresser. I don't care if I am reviewing a perfume that I have already reviewed but I am. There are perfumes (Chanel no 5) out there that smell a little differently depending on the concentration and the variations deserve a review in their own right.

Deneuve was and is one of the first vintage/discontinued scents that just blew me away upon first application. I was first introduced to Deneuve by reading about it on perfume blogs and people saying that it was a real pity that it was discontinued. I hopped on over to the Perfumed Court and found that there was an offering of 8ml of the extract version that was a really good price considering what people were offering on Ebay for the same 8ml. The extract version just blew me away.

The EDT version smells almost exactly like the extract version but seems to be a little rosier than the extract version. The lasting power is surprisingly good for an EDT. Yes, I am still mostly hoarding my Deneuve because if it ever is going to come back, it probably won't smell the same.
Posted by Eldarwen22 at 4:30 PM No comments:

Traveling is always stressful to me. It's the packing and getting there that I find to be stressful. I don't care if I am going to be gone 3 or 4 days at most, I hate packing. Trying to figure out what I will wear for 3 or 4 days in advance. Right now, no 5 is not so much of a prima donna right now but really wants to go to Virginia with me. Mitsouko, Deneuve and Epic are asking to come along too.

I keep asking myself, should I take one perfume or two? Should I take anything expensive or vintage? Should I take decants or full bottles? At this point, it's pretty funny, I've already picked out just about everything clothes wise but cannot for the life of me figure out the perfume. Perfume is the ultimate accessory and sticks around for quite a while. I have decided that a lot of my 'strange' and niche perfumes are staying home. Yes, MKK, Arabie and a few others are staying home. I'm thinking of sticking a few random decants in my purse would be beneficial.
Posted by Eldarwen22 at 7:50 PM No comments:

The conversation of having enough perfume has come up for the 50 millionth time in my household today. It is always when I am either searching Ebay, ordering from Surrender to Chance or Ebay that this conversation happens. The logical part of me says yes, I have more than I could ever use in a lifetime. Illogical says no. 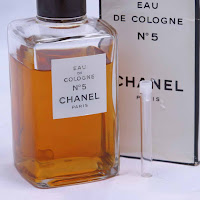 If I had just a bottle of Mitsouko, Lyric and no 5 and stuck to those, things would be fine. Fine as in there wouldn't be so many cardboard boxes lying around. We do ship a lot of things to my sister, so they come in handy. I think that it has to do with slowly but surely trying to get my hands on vintage perfumes. Mitsouko has always been an example of a hard to love for me. It did take me a while to fall in love with the current version of Mitsouko and it was hard for me to love the vintage version. Now I know why it was hard for me, even though I was fascinated by her. It was the peach note that tripped up my beginner's nose but it was the chypre structure that I loved. But it is impossible to find a really old bottle of Mitsouko that isn't a fortune. But no 5 on the other hand, is pretty easy to find and for some reasonable prices. I had to get 2 bottles of the cologne to compare. The first bottle that I had gotten, the edges are rounded making it look a lot more square. I'm thinking that this one wasn't kept in a cool place or just plain didn't hold up because toward the end, it smelled like no 5 but mostly of 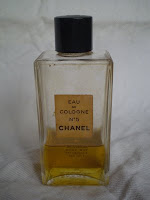 nail polish remover. The other bottle smelled better after 20 minutes of the nail polish note.

After poking around Ebay, I found myself a vintage no 5 in extract form that was a decent price. I'm sorry if I'm not exactly willing to spend $100 or more for a half used 1 ounce bottle of extract. Yes, I am cheap when it comes to something used.  One of the offerings was scary though. It was mostly full but the color was pale for a vintage and it was noted that there was some kind of sediment at the bottom but when you shook it up, you couldn't see it. I saw the picture after shaking it and the juice looked cloudy. That make me wary to get it.