Don't Have Much of Anything

I have this huge pile of perfumes to wear and review and I was going to review Andy Tauer's Veviter Dance. But I promptly forgot what it smelled like and I do remember that I did enjoy it. Since I mostly stopped buying perfume except the occasional decant, I haven't really started to start going crazy with the reviewing thing. Let's just say that in many ways, I am a lazy bum in that department. I honestly think that I am trying to use up what I have full bottle wise and the decants that I have already reviewed.

Going through my little news feed of just random news that catches my eye, I was Amazon. There was some stuff about Amazon releasing their numbers of last quarter and how many Prime members that Amazon has. Then I noticed that Amazon is raising the price of 1 year of Prime. I remember when Prime was only $79 then $99. Now the cost is going to be raised to $119. I have always loved Amazon and have been a Prime member for years and now I might have to reassess my Prime membership when it comes up for renewal. I renewed my membership for a year last month, so I have a while to decide. Amazon did send me a blurb about what I saved in shipping, video watching and music listening. Prime paid for itself almost 3 times over. It was enough for me to keep Prime for another year at $99. The excuse is that Prime is expensive to have for Amazon.

On Monday, the breeder had called and said that our puppy will be ready on Sunday. We will be driving around two hours to get the puppy. I had gotten the crate, some toys, some pee pads and I am waiting on the doggie bed to go into the crate. Yes, I have a Bark Box subscription but I don't know how my other dog will react to the puppy playing with the toys that he already has, so the puppy will have a couple toys of her own. All that's left to do besides getting the puppy is getting puppy food and a collar and a leash for her.
Posted by Eldarwen22 at 10:56 AM No comments:

Many classic perfumes have gone through reformulations. The longer a perfume has been in circulation, it's a given. There are many reasons why reformulations happen and it can be very annoying or down right infuriating. I understand why some reformulations happen. Some ingredients are either banned because of allergies, harvesting is cruel or some become endangered. I understand why some things have to be outright banned or severely restricted. But I'm never a fan of having things banned due to allergies. Perfume is not essential to living, it's honestly not. Food is essential to staying alive. But I am strange when it comes to the vintage and current stuff.

Chanel no 22 is another one. At first, I didn't like no 22. I found the EDT version to be too harsh and the vintage version to be smoother. Eventually, I started to enjoy no 22. Now I thing that I wasn't prepared or used to the powder and incense combination. I haven't tried the EDP version of no 22 so I can't comment on the EDP version. The version that I enjoy the most is the extrait version. It's rosier and more subdued. Powder bombs are hard to wear and harder to pull off.
Posted by Eldarwen22 at 10:29 AM No comments: 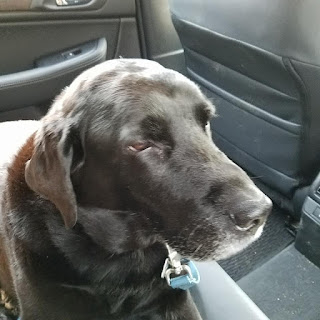 I'm still having a very difficult time with losing my dog. There are so many habits that are so ingrained and in a lot of ways, I forget that Charlie is gone. I miss seeing her in her "spot" on the couch, on the bed. I miss her barks when she wants somebody to pay attention to her because she is lonely. There are just so many quirks that I miss and some that used to annoy me. My other dog, Jake is having a difficult time without his four legged buddy, too. Yesterday, a deposit was made for a Lab puppy and now, it's a two week wait before the puppy can leave her mother.

Yes, we could have adopted a Lab but pet adoptions have gotten a lot more complex than what I remember. The rescue people want to take a look at your house, property, other animals if you have them and who knows how many interviews that they want. I get the fact that checking out the house and all and one interview but some things have gotten blown out of proportion. Any more than one interview and a home visit is overmuch. I get why the home visit and interview is important  but in some ways, some rescue groups act like they don't want you to adopt a dog. An animal is adopted because they are very much wanted.
Posted by Eldarwen22 at 11:47 AM No comments:

It's Friday the 13th and it's a horrible day. Last night was a difficult night. My 13 year old black Lab, Charlie had a rough night. After she ate her supper and received her medication, she suffered a seizure and lost her ability to walk. Over the course of 4 days, her quality of life went down hill. My family and the vet think that she was probably dealing with a form of brain cancer due to symptoms that she was displaying over the past month. A couple hours ago, we had to put Charlie down and I have spent the whole day as a sobbing mess. I know my other dog knows that Charlie is gone and won't come home. Well, she will come home but not in dog form but in ashes. I swore that I wouldn't wear perfume but ended up wearing Lolita Lempicks (the original, not the flankers). I don't know why I did it and I don't know too much right now except that Charlie is gone and I won't see her anymore.
Posted by Eldarwen22 at 6:12 PM No comments: 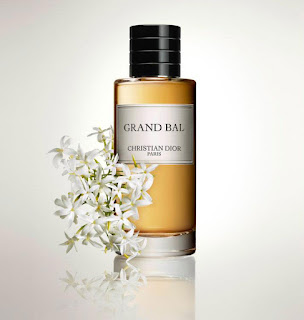 I will admit that I have never been the biggest Dior fan girl. Nothing has really moved me in terms of Dior. Diorissimo doesn't it for me, even in vintage form. Current released (Dior) kind of gross me out and annoy me. I will explain with Grand Bal.

I do have a liking for jasmine dominant perfumes with Sarrasins being my favorite. Jasmine can be a little difficult because under the wrong circumstances, jasmine is abhorrent. Overwhelming and cloying. Grand Bal has jasmine in spades, you can't miss it. At first, I thought that I was smelling tuberose, which is my arch nemesis in terms of perfume but it was the jasmine. The jasmine and tuberose thing reminded me of Nuda but even though tuberose isn't listed in the notes that I see, I'm pretty sure it's in there to add some creaminess. What got me was the whole watery thing in Grand Bal and I loathe things watery. I'm thinking that Dior used calone and won't fess up to using it. Yep, Grand Bal is this whole watery jasmine mess that just doesn't work. If it doesn't work in the EDP version of Diorissimo, it won't work in Grand Bal. Grand Bal was just a huge mess on my to where I can only smell a watery jasmine that was done horribly.

The lasting power of Grand Bal is 9 hours on my skin and that's 9 hours to long with some pretty hefty sillage. Good thing that I am not willing to part with $210 for this.
Posted by Eldarwen22 at 9:51 AM No comments: 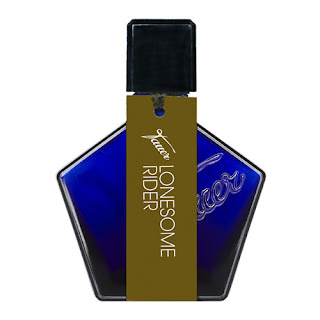 I will admit that I am a huge fan of Andy Tauer and his work. Yep, I'm a fan girl. Even though I might not like some of his work, Andy has consistently released some good, if not great work. And I have enjoyed most of what I have tried.

About a week and a half ago or two weeks ago, I had ordered LADDM from Andy Tauer's website instead of Luckyscent. Ordering from Andy's website works out a little better than Luckyscent in terms of price and I'd rather that money go directly to Mr. Tauer and not Luckyscent, I'm strange that way. I did run into a little issue with the website and never received an e-mail confirmation. I had checked my junk e-mail and trash folder to make sure I hadn't missed it. Nope, it didn't arrive in my inbox. I had contacted Mr. Tauer and had explained my situation and was wondering if everything went through like it should. Mr. Tauer had e-mailed me back and said that he would take it up with his IT people and was sending me something special in the mail for my inconvenience. For me, it wasn't any kind of inconvenience, just a very minor annoyance. When my package of LADDM arrived, it was just the perfume itself but there was another package. Inside, there were 5 samples and a note. It was very sweet of Mr. Tauer to do that. Inside, were a few that I haven't tried yet and Lonesome Rider was one of them. Naturally, I had to try it.

First blast was the grapefruit. Normally, any kind of citrus bugs the shit out of me but the grapefruit is bright and almost effervescent. The leather comes into play about a minute or two later. The leather is not the plush leather of a worn handbag or Chanel's Cuir de Russie. I am strongly reminded of brand new shoe and a shoe store. At 10 minutes in, I'm not so sure if I'm liking this so much. I keep looking for that whopping dose of Tauerade that I'm so familiar with and not finding it, well, not a lot of it. The cistus does poke through along with some floral notes that I can't identify at this point that ties all of this together. The lasting power is about 8 or 9 hours on my skin with some projection and that's normal for Mr. Tauer's work for my skin except for the projection. I usually get a little more projection with the Tauer line. I think that this one just isn't for me and I am okay with that. I will keep sampling Mr. Tauer's work and keep buying it.
Posted by Eldarwen22 at 8:47 PM No comments: