I am failing miserably at this whole not buying full bottle stuff. I haven't bought anything yet but seriously looking at the Chanel travel sets. I honestly shouldn't even be trying to look but yet committed to what is the best bang for my buck. Thus far, I can't decide if I want to go with Coco Mademoiselle or no 5. I am leaning to Coco Mademoiselle due to the fact that I do not have any of it in my collection and loads of no 5. I am spending way to much time on this trivial thing. But with being on the Chanel website so much, it's made me think about my perfume journey a little bit and how much I have probably spent. At this time, I am more interested in getting travel sets instead of full bottles. But still a little annoyed, it seems in this respect with Chanel, I seem to be getting more packaging instead of perfume for the price I am thinking of paying.

In year past, it didn't seem to matter too much on how much I have spent on any one bottle of perfume. It didn't matter so much if I smelled the perfume before I bought it, $130 for under an ounce of perfume, sold! A 50ml or anything for over $200, why not? But circumstances did change and that meant that dropping any kind of money on perfume had to be thought about and limited to a couple times a year. Then I had to think very carefully. It boiled down to how much I could afford after my bills were paid. It's been tough and I am hoping that by the end of the year, I can nab a bottle of Coromandel.
Posted by Eldarwen22 at 11:25 AM No comments:

The No Buy Period

I have embarked on a no buy for perfume. I had started in September and since then it's been really tough. Andy Tauer has released a new perfume and when Luckyscent had a promo if you spent $100 and over, you entered a promo code to get a 5ml mini of it. You don't know how sorely I was tempted to get a bottle of Lonestar Memories to get that mini. If I remember right, on Andy Tauer's site, if you bought a full bottle, you could get a mini too. But some reality busted right through and it came in the form of needing two crowns on two teeth. Have I gotten those two crowns? Nope, still dealing with insurance stuff and also need a tooth pulled first.

When I am saying no buy, it doesn't mean that I don't get groceries or do anything, it means that I've really tightened my belt. I only allocate so much a week for groceries and allocate a whole lot less for going out and doing anything. But it seems like I have been attempting this no buy thing for too long. The last full bottle I had bought was Kiehl's Musk Blend in August. It was cheap enough without free shipping, a 20% coupon and a gift card. But all of those things made it cost me next to nothing. But it's still very had to change old habits, even my decant purchases have changed. I have really had to cut back on that. If there is a 15% or 20% coupon, I take a look at it and debate of it there is anything that I really want and if there is, I can't go above a 2ml decant. If I play my cards right and save my money, I might be able to get something around Christmas time.
Posted by Eldarwen22 at 11:33 AM No comments:

Of TV Shows and Rewards

I am not the biggest TV show watcher, I have a select few that I watch. But sometimes I do have to call it quits on a TV show. The longer the show runs, the more potential of it going bad. I was really big into the Chicago series (Med, PD, and Fire) but now I have given up on them. Chicago Med hasn't been that great for the past two seasons, PD wasn't that great last season but Fire isn't worth watching anymore. I was a fan of Fire since day one but the beginning of season 8 was what made me give up on the whole series. I would have went with someone else dying and the story lines are stale at this point.So yes, I have got to find something new.

This past month, I have spent quite a bit of money at Ulta. Since September was my birthday month, I was able to score double points. Then there was a double points promo that was going on and scored a little more in the points department. I log onto Ulta to see how much I have accumulated so far and my jaw dropped. I had managed to accumulate 755 points and that equals out to $30 that I can take off my next purchase or save them and rack up more points and then get something else for myself. This is what I love about Ulta, is how the rewards system works. The most I have ever accumulated in previous years was about $15 or $20 and this is a record.

At this point, the past few days have been strange.Today and tomorrow, people are filming a movie. It is pretty cool to have that happen in my small town. But that means, I am boxed it at the moment. Can't exactly leave my street at the moment but that's okay, I don't have any place to be. I am currently poking around the Internet for the best price for the Amouage Lyric body butter. So far I am not having a whole lotta luck but found something strange. Walmart is now selling Amouage product from their online store. I had to take a look ar it and after taking a look, most of them are being sold through third party sellers. Some of the prices are pretty good but I am not willing to take that chance of it being fake. I would not have pegged Amouage allowing Walmart to sell their stuff.
Posted by Eldarwen22 at 1:06 PM No comments: 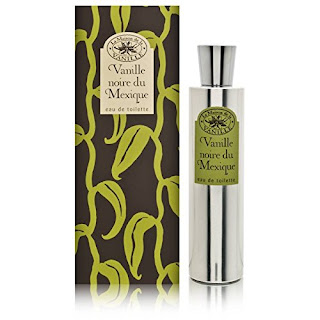 I have been dithering on writing a review for far too long at this point. Now it's off to the races with a review.

Off and on for the fast couple weeks, I have been wearing La Maison de la Vanille's Vanille noire du Mexique. It's a goofy one to me. I get the basic layout of two different perfumes. I mean, really I do. I get Shalimar Ode a la Vanille (the Mexican one) and L'Artisan's Havana Vanille (or Vanille Absolutment or whatever they called it before the discontinued it). It has the basic Ode a la Vanille layout nut without the naughty bits but also had the thinker's parts of Havana Vanille. Havana Vanille was huge on the tobacco and the rum and Mexique doesn't have any of that but hints around at it.

Mexique is kind of a funky perfume because it plays off of two perfumes but yet, it's it's own perfume. I consistently get about 7 hours of wear out of this and make skin eats EDT's for breakfast. What I am really loving is the price tag of Mexique. For $60 and a 100ml, that's a really good bargain in the niche/hard to find. What makes me a little hesitant of purchasing a bottle is when I bought the sampler, the spray mechanisms caused for quite a bit of evaporation. That's what happens when spray mechanisms are put on by manufacturers. I hope that in the next couple months, I will take the plunge and just get a bottle. Since Shalimar Ode a la Vanille was a limited edition and Havana Vanille was discontinued, this fits the bill for me in terms of a vanilla.
Posted by Eldarwen22 at 9:27 AM No comments:

Well, my vacation is over and I must go back to work.I didn't exactly do a whole lot. I set up doctor's appointments early in the week just to get them out of the way. There were things that I wasn't expecting but kind of was. I have to fight with my health insurance about the crowns that I need on two back teeth. For some reason, my health insurance considers dental crowns as cosmetic and not something necessary. So I must fight with them because I would rather keep those two teeth.

I thought I would be testing out a few perfumes on my vacation but that never happens. When I started my blog, I was reviewing just about everything under the sun but that's not happening now. It's come down to the fact that I have gotten pretty lazy. I want to blame it on the fact that most of what I have tried, I haven't liked. Every time I try a new perfume, I want the clouds to part and the angels to start singing but it rarely happens. There are too many new released for me to even try to keep up with and I have a huge pile of things to test out and review.

While I was on vacation, I was going through all of my reviewed and worn decants. Seeing what was evaporated, what I had multiples of. There were a couple of them that were totally evaporated and I threw those out. But noticed real quick that I had quited a few multiples that were of various stages of fullness. I had combined all of those multiples and was able to make some more space. Those decants of De Profundis and Sarrasins went right into the mostly full bell jars. The 8mls spread out over 3 decants of Noontide Petals, went into a bigger decant. Some of those multiples were not emptied enough to be combined. Some of you are probably doing some pearl clutching but I had to make some space and haven't had any mishaps with this.
Posted by Eldarwen22 at 11:00 AM No comments: