Almost two weeks ago, Bath and Body Works had a big candle sale. For $9.95 for a 3 wick candle, that was a 60% discount (I did the math) and it was a pretty good deal. I had initially planned on doing the candle sale online or worst case scenario, go to the Bath and Body Works that's 20 minutes away from my house. That didn't work out. A guy friend wanted to go to the mall to pick out a gift for his dad at the mall, so off to the mall 45 minutes away.

When we got to the mall, it wasn't so much a sea of people but a sea of Bath and Body Works bags when we just entered the mall. But as I got closer to Bath and Body Works, the sea of those bags was even more concentrated. People with carrying 3 or 4 large bags of candles. I knew there was some sort of limit on how many candles you could get in one trip but I think that people were making multiple trips to the store to get around the limit. It was difficult enough alone getting into the store but even harder to move around when you are inside. The employees looked like they had a rock solid plan but were having issues trying to keep everything stocked. The biggest gripe was other customers. Most had to stand in one spot and smell every candle. Didn't matter if it was all the same scent, every candle had to be smelled. Are you looking for the strongest smelling one of the Evergreen candle? They are all equally strong smelling, just put one in your cart. Can't decide on which vanilla to get? Just pick one, this isn't neurosurgery or ending hunger in the US and move along. My biggest thing was I knew how many candles I was getting and the scents I wanted but I don't know why so many people didn't respond to an excuse me. A louder excuse me didn't seem to working but when a few other customers realized I was trying to either get through to get something they looked surprised and asked if I was standing there for very long. My response was it took you both 10 minutes and 4 loud excuse mes before you bothered to notice? This is why I like to avoid malls during Christmas and large crowds period. It's hard enough in normal circumstances for people to actually respond to an excuse me but sheesh.

I did like how the employees had a plan at the cash registers and the line to check out. They kept the line moving and kept the customers in line from acting foolish. There were a couple people that thried to get out of line to get a few more things and still had their place in line but there we so many employees that there dealing with the line before anyone even got to the register, it was impossible to do. Next candle day sale, I am doing it online.
Posted by Eldarwen22 at 9:10 AM No comments: 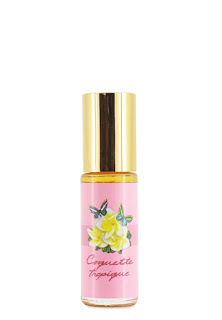 Many months ago, I was poking around Luckyscent looking for a good bargain. For the past few years, my perfume budget hasn't been that great and full bottles are a rare treat. I wasn't too serious about finding anything that I could afford but when I stumbled on Monyette Paris Coquette Tropique for $10 and a box of tea, I figured for $10, what do I have to really lose?

For $10 I really didn't have high standards or hopes for this. I was hoping for something cheerful, nothing too serious. For crying out loud, I do have perfumes that are cheap, cheerful and smell good. Coquette Tropique missed the mark in a big way.

I get a huge blast of tuberose that lasts from start to finish. The list of notes say gardenia but gardenia in perfume is a construct of tuberose and something else. So the gardenia note is a lie. I don't know what I am exactly smelling after but it smells incredibly cheap and fake. The fruit and flowers smell like they are either rotting or artificial. Something about this whole thing just made my stomach roll and not in a good way. There is nothing tropical or flirty in this one. In a way, I was kind of hoping for the lines of Worth Courtesan.

The good thing at this point is that this was $10 and not the original $45. Forty-five dollars for an eighth of an ounce of oil. I am happy that I didn't sink that kind of cash into it. I know that I won't be wearing this again.
Posted by Eldarwen22 at 10:34 AM No comments: 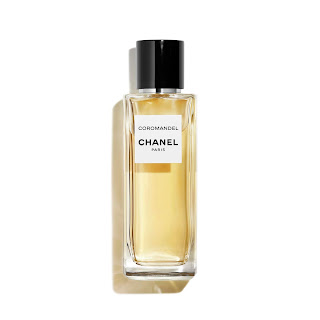 I actually decided to get a decant of Coromandel off of E-bay. The seller shipped it out pretty quick and I got it pretty quick. I have been pretty wary of the Les Exclusifs line since they went from the EDT to the EDP formulation. Anyone familiar with Chanel knows that no matter which formulation of any of their scents are going to smell different.

After trying the EDP version of Cuir de Russie and not being to amused, I was a little reluctant to get a full bottle of Coromandel EDP without trying it out. I was pretty late to the party with Coromandel. When I tried Coromandel, my 5ml decant was half evaporated and STC and TPC were not and still not allowed to sell any decants of Chanel. So I had reservations about decants off of E-Bay for a long time due to the fact that I had a pretty good chance of getting something fake.

When I ordered my decant of Coromandel, the only available size that the seller had was 10ml. I was looking for more of a 3ml size. The EDP does smell like the EDT but with a few differences. I found the EDP to be more sheer but in a way, smoother than the EDT. I noticed that the patchouli was a little smoother and a little quieter. I noticed that there wasn't as much projection. I expected this kind of projection along the lines of a parfum. The lasting power is much shorter though. The EDT gave me 6 hours of wear but the EDP only gave me 4 hours.

I wouldn't mind a full bottle of this but I am still kicking myself for not getting a bottle of the EDT while the prices were still fairly reasonable. I do want to try the parfum version on this one and I am sure that it's glorious.
Posted by Eldarwen22 at 11:17 AM 1 comment:

That Time of Year

Thanksgiving, Black Friday and Cyber Monday have come and gone. I've never been the biggest fan of Thanksgiving. I think it's my distaste for football, eating so early and turkey. Yes, I am not a fan of turkey and I think it's one of those take it or leave it foods.

What annoyed me the most is an overflowing e-mail about the deals. The e-mail bombing started on Wednesday and didn't let up until this morning. I looked at a couple of them and didn't find the deals to be appealing. Bath and Body Works is the only one that is still bombing my e-mail account. The Bath and Body Works deals have been pretty good but I haven't bitten yet. I am waiting for their big candle sale on Saturday. A 3 wick candle for $8? Count me in and those normally cost $24.50 full price. Most of the time, Bath and Body Works has some kind of deals on their candles but more than half off is pretty good. I love a good deal but I am not in the market for a whole lot at the moment and I gotta be pretty selective at this point due to my cash flow being a little wonky. But can't be too selective with some relatives living out of state and have to keep shipping cutoff times in mind.

There aren't too many perfume blogs that I really read anymore. I used to read quite a few blogs but things changed. Some stopped blogging for various reasons, some don't post as often, or just don't fit into my reading habits anymore. The Non-Blonde Blog was one of the blogs that I would read but in the past couple years, it just fell through my reading cracks. A few weeks ago, I went to see what was posted and I didn't see too many posts. What shocked me is when someone on Now Smell This had said that there was a post that the author of The Non-Blonde, Gaia, had unexpectedly passed away. Then the Perfumed Posse reported another death in the perfume community. I've never followed video blogs but it's still sad to see this stuff happen.
Posted by Eldarwen22 at 11:52 AM No comments: