After 3 years of not seeing my nephews and sister, I will be seeing them. My brother in law is in the Marines, so they move around a lot and California is kind of a ways away. Since Easter is on April Fools Day, my nephews are fairly young, I will be able to create Easter baskets. So now is the time where the Toys R Us credit card is quaking in it's boots and money will be saved to make sure that I can go out and do things.

Since I really haven't been buying a whole lot of perfume, I've been into make up, specifically eye shadow. There are many different types of eye shadow, brands and price points. I really don't do the drug store brands anymore and I can afford a little bit better than Clinique more often than not. But I do have my preferred brands that I use. I'm not huge on the Kat von D pallets any more, mainly because I'm not into shimmer and because even though I use a primer, the eye shadow seems to move to the creases of my eyes and migrates to under my eyes. But the colors are pretty good.

The two brands that I use the most are the Urban Decay Naked pallets or the Too Faced pallets. I mainly stick to the neutrals because I want to enhance my eyes not look like I joined the circus. I don't have a huge patience level to use dark colored eye shadow or other colors like blue, green, purple. The neutrals that are around my skin complexion are pretty forgiving to where the other colors are not so forgiving. Mess up just a little, it shows in a big way since I am so fair skinned.
Posted by Eldarwen22 at 10:27 AM No comments: 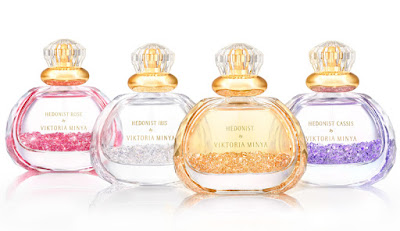 I remember when Viktoria Minya came out with her first perfume, Hedonist. The blogoshere seemed to blow up in perfume land. I raced right over to Luckyscent in the first few days of it's released and bought a bottle before I even bought a decant. A year or two later Viktoria had released 3 flankers. The only Hedonist flanker that isn't on Luckyscent is the Hedonist Rose.

I have always had a turbulent relationship with flankers. So I was wary of getting a decant of Hedonist Rose because it was a flanker and not exactly the easiest to get in case I fell in love.

Hedonist Rose naturally starts off with rose but not your ordinary rose. It's a jammy rose with a dose of peach. The peach kind of reminds me of Mitsouko, noticeable but doesn't take over. But the rose strongly reminds me of Nahema but it's not a copy cat at all. The peach and wine keep it away from being Nahema. The wine gives that boozy element but rum gives the original Hedonist the booze note. I haven't smelled wine in a perfume but have smelled rum and it's a different smelling booze note. I think that rum should have been stuck with unless it smelled really horrible with the rose. I see the similarities of Hedonist and Hedonist Rose. They are more like kissing cousins than siblings.

The lasting power of Hedonist Rose was impressive, lasting 9 hours on my skin. I think eventually I will get a bottle from Viktoria Minya's website but I don't exactly know exactly how much it is at the moment because of the price conversion and I'm not the biggest fan of ordering anything from overseas.
Posted by Eldarwen22 at 10:02 AM No comments:

Life Before Perfume and Other Things

Since it looks like I have what I call a "baby cold" and a stye on my upper eyelid, reviewing a perfume is out. I still can smell but with a small cold, I can't smell that well to judge anything. It turns out that I did have a little more funds than I thought due to holiday pay, spending less than I thought for Christmas and returns. But I dared not and really couldn't spend a whole lot for a new bottle of perfume.

Inexpensive and niche perfume is not easily used in a sentence. But periodically, you do find something. What I have on my to buy list, in terms of perfume, is fairly up there in terms of price, so I proceeded with caution on Luckyscent and took at look. I posted on Twitter to Luckyscent that they shouldn't be so reliant on that sale page of theirs. Some of those bargains, are not exactly bargains. My idea was to every 4 or 5 months, offer a 10% or 15% off your order. Hopefully, they will take that into consideration. So after dithering on Andy Tauer's Vanilla Flash or spending extra money Viktoria Minya's Hedonist travel set, I went with Vanilla Flash. For $63, that's practically free in terms of niche. I'm going to have to wait until I file my taxes to see what's going to be my deal in terms of a refund. Maybe that full bottle of SDV is in the cards. But I digress.

But it got me into thinking about how things were before perfume. Before 2007, I only had one or two bottles of perfume. They were popular perfumes at the time, Clinique Happy and Estee Lauder Pleasures.  I wasn't someone who wore perfume every day. If I remembered to put some on, I did but it wasn't something that crossed my mind very often. So they sat around most of the time and took quite a while for me to use up. Somehow, I had received an e-mail from Chanel, telling me about Cuir de Russie. At the time, spending $200 on a perfume was a massive deal to me, especially since I had never smelled it. I figured that it was 6.8 ounces and if I didn't like it or had an allergic reaction, I would return it. Now, spending $200 or more on a perfume, doesn't scare me so much and I don't do the blind buy thing any more. I do consider the price and if I am going to spend over a $100, it better be for something I absolutely love before I commit. It's funny that now I can't really leave my house and go anywhere without perfume. What's even funnier is that in 2018, Cuir de Russie is no longer in EDT form and while they have a 2.5 oz bottle and a 6.8 ounce bottle, the prices have changed dramatically. The 2.5 ounce bottle now costs as much as what I paid for a 6.8 ounce bottle 10 years ago ($200). The 6.8 ounce bottle is a whopping $350. That made me shudder to think of Chanel becoming uber expensive to the point of not wanting to buy perfume from Chanel anymore.
Posted by Eldarwen22 at 10:21 PM No comments: 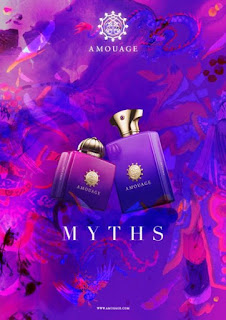 Yesterday, I had meant to grab my decant of Shalimar and instead grabbed Amouage Myths Woman. I was starting to run late and just grabbed the wrong decant. Usually, I don't spray any perfume when I leave for work until I am about two or three minutes away from work. Don't ask my why work is the only one that gets that treatment.

When I found out that I grabbed the wrong decant, going into work without wearing perfume wasn't an option. So on went Myths. I had first thought that it would be great. Crushed greens note and a green hyacinth note. Both notes were huge. Then after 10 minutes, things started to fall apart and in a big way. Patchouli and chocolate became huge players too. Patchouli and I are not friends and I am not a fan of chocolate in perfume. With the patchouli and chocolate, I was reminded of Coromandel, which I didn't much care for either. But Myths was still kind of in the awesome category.

I won't be getting a full bottle of these. Not even the first 10 minutes and a kick ass bottle can save it and in a way, I'm happy and so is my credit card. But I feel that Amouage has lost it's way especially after the creation of Honour. I miss the spiciness and dense manner of Amouage, which made Amouage great.
Posted by Eldarwen22 at 11:51 AM No comments:

It's a New Year

Every year, I've always hoped that I would finish a couple bottles of perfume before the year's end and that never happens. Well, today, it did. I have what seems like a million bottles of vintage Bal and today, I managed to finish a 1 ounce bottle of the cologne. I'm excited that I actually finished a bottle of something but saddened at the same time. The current version of Bal is a disgrace and vintage Bal can be expensive. Hopefully, I can get another bottle or two finished before adding anymore full bottles to my collection. I can't exactly go out and buy any full bottles because the finances are not there and probably won't be until sometime in March or April, when I do my taxes.

I will admit that I do enjoy Star Wars and did get to go see that a couple days after Christmas. I will admit that is was to the point of too long and that some stuff in the movie was pointless or not explained, I did enjoy the movie. I wasn't happy about how Rey's training went down or how Snoke's backstory and who he was were my two biggest gripes. I am not holding my breath with Episode 9 to explain or correct any of that. I do believe that Episode 9 will be that last Star Wars that I will watch. With Han, Luke, and Leia gone, it won't be the same.

Sorry for the bitching and whining.
Posted by Eldarwen22 at 12:24 PM No comments: