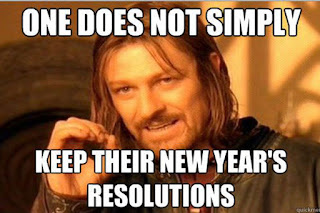 We are three weeks into the new year and many have made New Year's resolutions. Every year, I make perfume resolutions with varying degrees of success. Even though I fail with them, I do have some successes. Let's face it, it's tough going. But I am happy that I have stuck to my resolution of not buying anything perfume wise yet because I am broke. Broke as in the fact that I did overspend with Christmas and the bills have come in. The bills have to be paid first before I can go and get or do anything fun. It may be months before I can add anything new to my collection. I'm looking at is as a good thing right now.

You know that perfume to buy list? I'm taking another look at it. There are some that I took another look at and went right into the maybe list and some others that are going into the I will get them eventually type of deal. It's made the list a whole lot shorter.

After looking at my massive, massive to me at least, I really realized that I really need to use up some of my full bottles. I have boatloads of backups and a few that are almost finished. I'm at the point of where I am determined to finish some of those perfumes. I have a vintage bottle of Shalimar that is a third full and just begging to be finished off. That bottle of Shalimar isn't all that vintage (probably a '90's version at best) and I can more than afford to finish that one off. That bottle of Cuir de Russie that I spilled? I can finish that off too in no time along with a small bottle of no 19 extrait. Then I think that I will finish off two bottles of vintage Bal that are half full. See? Not so hard when you figure out some of this. It can be the execution of the plan when it boils down to it.

I've also made some commitments to finish off some of the decants that are floating around my house. Take my word for it, I have tons of those and I do need to take a look to see how many have evaporated, how many have a wearing or two left and I must start wearing and reviewing more. Hopefully I will have some space on my dresser to add one or two new bottles of perfume. But I must finish at least 4 bottles this year before I can consider doing that.
Posted by Eldarwen22 at 2:05 PM No comments: 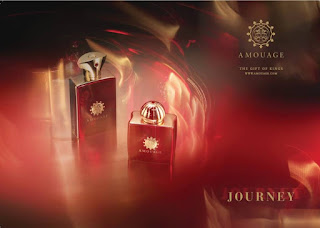 I've made no secret about how I am an Amouage fan girl. I have many Amouage loves and own a few bottles and fairly recently, I've been slowly working on getting the Amouage body products.

Slowly but surly, I have been working my way through my decants that I haven't worn or reviewed yet and my hand landed on trying out Amouage Journey for women. I really haven't explored the Opus line or the masculine offerings of Amouage in depth. I've tried a few of the masculine offerings but they don't seem to work for me in the way that the women's versions do.

Journey is not the kind of perfume that says it's an Amouage perfume. Epic, Gold, Lyric, Memoir, Ubar have Amouage written all over them and I view those as what a typical Amouage is. Journey is very different and wasn't what I was expecting at all. In the first two seconds of hitting my skin, I honestly thought that I was smelling one of my most hated things, tuberose. I have never enjoyed a tuberose dominated perfume, too suffocating for me. Then I realized that I was actually smelling the honey combined with jasmine. Now the jasmine is not the high pitched, shrill type of jasmine nor is it presented like A La Nuit or Sarrasins. Okay, the jasmine is more of the A La Nuit type of deal on my skin. So no skank from the jasmine but the jasmine is muted by the honey. During the time I was wearing Journey a few other things crept in. Was I smelling a tea note, apricots, osmanthus? I have no idea (I don't have a whole not of experience with those notes) but I think the structure of Journey had left me a little jarred. I was thinking that I have smelled this before but when and where? After rummaging around my collection, I found out. Pushed in the back of my collection was Viktoria Minya's Hedonist (I promise that I will eventually get to Hedonist Iris and Cassis). I popped open the can and took a quick sniff and bingo, there it was. Journey has pretty much the same structure and smell as Hedonist but the there was no booze note and Journey had a prominent jasmine note. I do like Journey but I'm not sure if I would pay over $300 for a 50ml bottle since it isn't love for me and I already own Hedonist. Maybe down the road, I will end up getting a full bottle but it's not in the cards for me right now.
Posted by Eldarwen22 at 9:43 PM No comments:

Before falling down the rabbit hole of perfume, I never gave perfume much thought. I did wear perfume but I was quite a bit like many people, casual perfume user. I didn't seek out new things, didn't explore notes, nothing. I was into simply pretty. For years, I was a user of Estee Lauder Pleasures and Clinique Happy. If I wore other perfumes, they were of the straight up floral type.

Then came that e-mail from Chanel and getting that massive bottle of Cuir de Russie. I found Cuir de Russie to be pretty likeable but still wasn't sure of it, it wasn't what I was used to smelling, especially on me. Then I started to love it and seek out the perfumes that were not the simply pretty. I started seeking out the unusual, the animalic and the straight up weird. And I had found plenty of those and then started branching out into looking for vintages. When you starting seeking stuff out and trying new things, it gets expensive and fast. Now I am at the point of I have enough right now and I am trying to finish some full bottles perfume and decants. Let's see how long this lasts.

Now back to the simply pretty. Pretty and nice is just that, pretty and nice. But after a while, the pretty and nice failed to move me. I think it was the fact that I wasn't this person that was a teenager or someone in my early 20's anymore and did want the things that were a little more mature and maybe those that are a little more funky. Simply pretty and nice is more for the person who doesn't really love perfume, it's for the ones that are wearing perfume for the sake of wearing perfume. I do have a couple of perfumes in my collection that are pretty (Un Coeur en Mai for example), I find myself not reaching for them too often to seek out a lot of the simply pretty.
Posted by Eldarwen22 at 12:49 PM No comments: 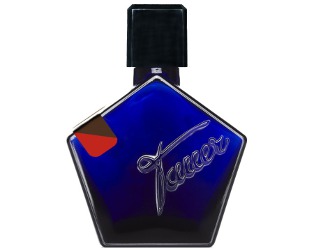 My  pile of unworn and not reviewed decants has reached epic proportions. It used to be just a massive pile of decants. With the holidays and the sales that went on, I reached that threshold of epic. It's come to the point of that I have to start wearing and reviewing them. Instead of going into the bag to grab something, I reached for one of my newest decants, Andy Tauer's Au Coeur de Desert.

When I first heard about Au Coeur de Desert, I was a little horrified and a little curious. From what I read, it sounded like a straight up flanker and it is pretty much true to me. I have never been any kind of fan of flankers, especially when it comes down to cult classics and classics. There are very few flankers of perfume that are well done. No 5 Eau Premiere is one of them, the Shalimar Ode  a la Vanilles are another example of flankers done well. But I am not blogging about them.

Curiosity got the better of me and STC was having a 15% off sale, so it made the price of a 5ml decant more palatable for me. Did I need a 5ml? No, a 2ml decant would have worked but I wasn't sure if I would need a lot of wearing for this one. So onto the review.

L'Air du Desert Marocain is one of those perfumes that is a cult classic and is well regarded. L'Air was one of those perfumes that I did buy blind and don't regret. I do have a massive liking and respect for Andy Tauer's work even though some of his offerings don't exactly agree with me. When I got my decant Au Coeur, I waited probably 3 days before trying it. Au Coeur is almost word for word just like L'Air but a little different. I find that Au Coeur is a little smoother than L'Air and a little less austere. Both still run on the masculine side of unisex but Au Coeur, not as much though. What impressed me the most was the sillage and lasting power on this one. Instead of getting 5 or 6 hours like I do with L'Air, I get 14 hours, yes, 14 hours of skin time. Then I realized that it was an extrait and not EDT or EDP. Au Coeur is definitely a on the to buy list but more of at the bottom due to the fact that I own L'Air and I don't wear that enough to justify a full bottle right now.
Posted by Eldarwen22 at 11:52 AM No comments: